With a good number of novelties and strong choices, Pokémon Violet and Scarlet stand out as the good pupil of video games for this end of the year.

Three years later Sword and Shieldit was time for Pokémon to renew its game. The cult franchise had already taken a first step forward with Pokemon Legends Arceus, but this time it’s the right one. Open world, new mechanisms and new region to explore, Paldea aimed to revolutionize (finally) a saga too used to resting on its laurels.

Pre-order the Duo pack with steelbook

From our first steps in Paldea, the immensity of the new region imagined by Game Freak makes us dizzy. Inspired by Hispanic culture, Purple and Scarlet finally offer us the open world that Pokemon Legend Arceus promised us at the start of the year. The map stretches as far as the eye can see, the landscapes follow each other but are not alike, and the monsters that come to disturb our adventure are numerous. Where Hisui took advantage of a contemplative void consistent with the scenario, but sometimes too marked, Paldea teems with life and color, in a rich and substantial universe. The world is vast for an apprentice trainer, and it is also easy to get lost when going off the beaten track. Leaving the linearity of previous opuses, Purple and Scarlet open the doors to an entire universe, just waiting to be explored. 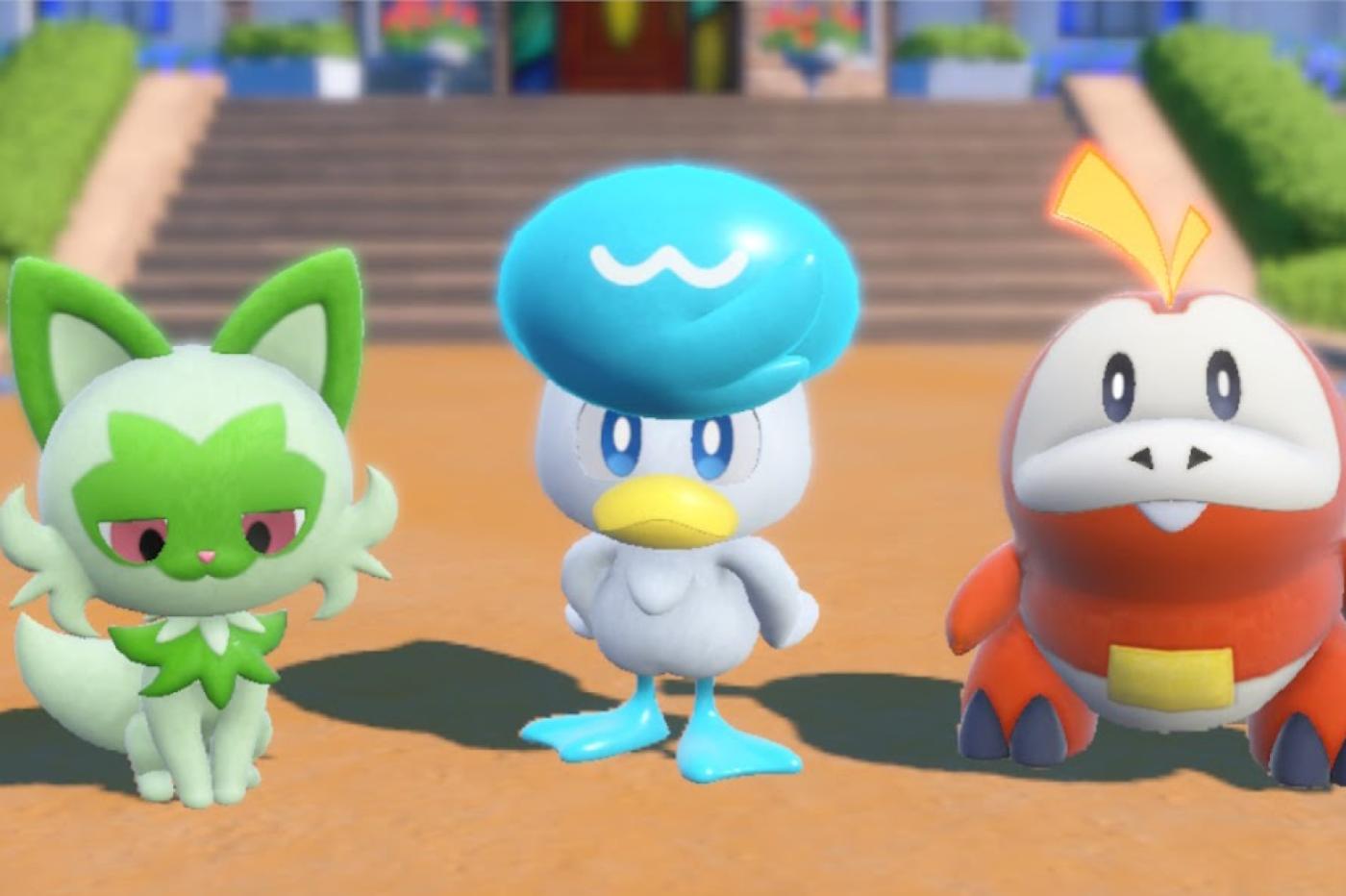 In addition to this beneficial freedom, there are also new gameplay elements. Unsurprisingly, the license does not contrast directly with its origins, but brings here and there some new features that help make the game even more enjoyable. first by the absence of loading time between the different areas, which offers a significant fluidity to the gameplay, but which is fatally compensated by rather substantial latencies when entering buildings. To remedy the problem, Game Freak has chosen to limit interior environments as much as possible. No longer hope to enter people’s homes as you see fit, you will now have to be content with arenas and shops.

Another addition inherited from Pokemon Legends Arceus, wild spawning of pocket monsters now happens in real time. A significant advantage for hunting for shinys, now visible from a distance, but more generally for all your exploration. On the novelty side, quick fights are a game changer : not only is it now possible to explore the region alongside a member of his team, but in addition the latter can take the initiative to fight alone the wild Pokémon nearby. Enough to make you grab some extra XP points during your adventure. 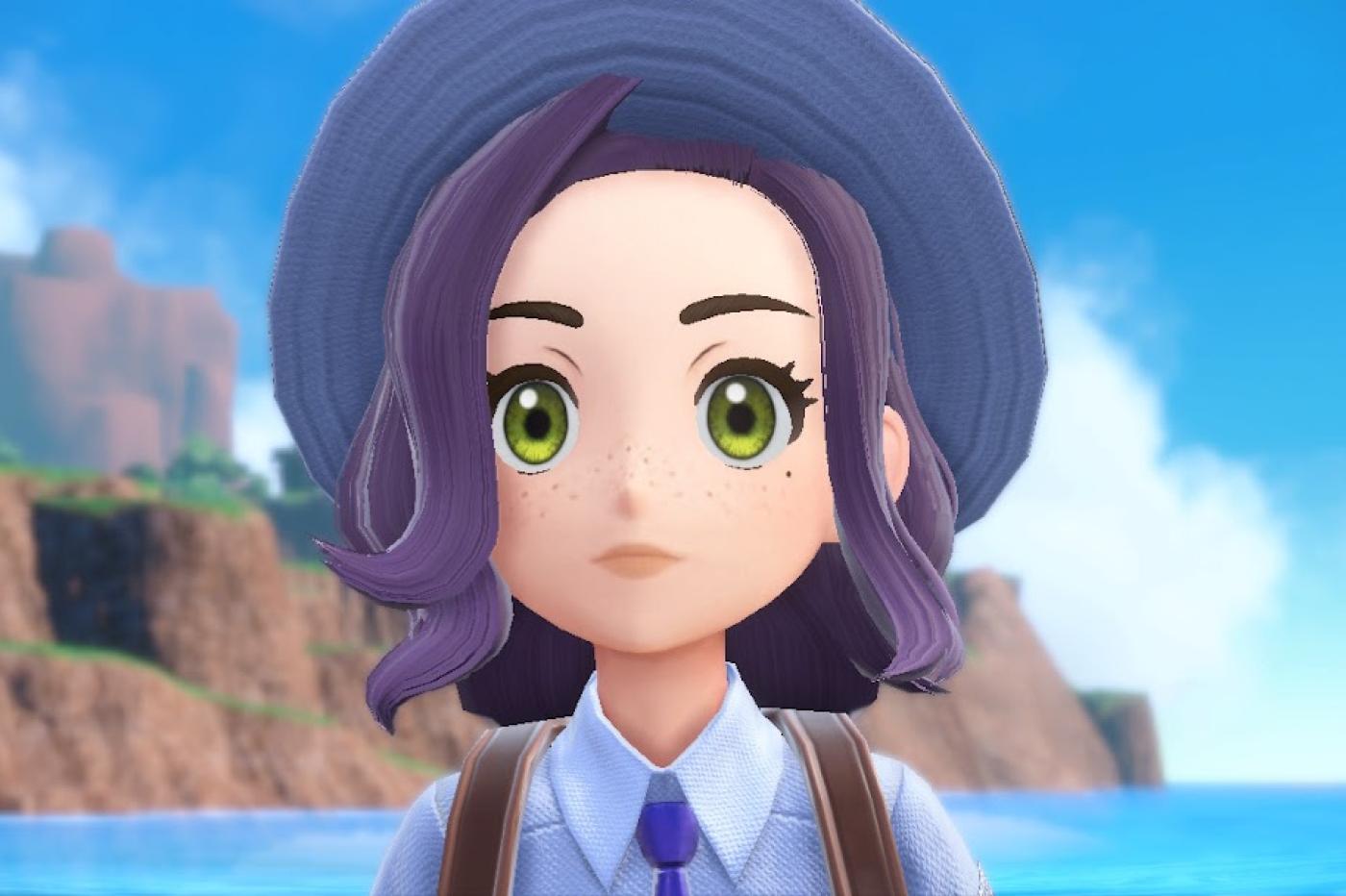 All of these elements bring with them a exhilarating, almost paralyzing sense of freedom at the start of the game. It must be said that compared to previous generations, the big gap is there: as soon as your day of integration is over at the Academy, your character is left to his own devices, with for only rule to find your treasurelike a thinly veiled metaphor for a transition to adulthood that was long in coming.

Obviously, freedom is not total. Under its air of a vast open world, Game Freak knows how to keep us on the right track. Some areas, for example, will house Pokémon that are far too powerful to get lost in at the start of your adventure. Others will remain inaccessible until you have unlocked certain features related to your mount, by winning specific events. Fortunately, this course of action is far from restricting our gaming experience.

The open world we’ve been waiting for

For a massive region to explore, Paldea has less than 30 Pokémon Centers, now limited to simple open-air stands. This is not much, especially since the latter are often concentrated in urban spaces. Fortunately, Nintendo has it all covered, with the addition of picnics, which will allow you to heal your allies by preparing them a few sandwiches with various properties. Without revolutionizing what was already proposed Sword and Shield with its curries, we are dealing with a rather nice feature, and above all very useful if you want to start climbing Mont Nappé.

If the world of Purple and Scarlet changes the game is that it is no longer content to connect the cities by linear routes where the only interest lies in waving tall grass in search of the rare pearl. Paldea alternates between expanses of water as far as the eye can see, arid and inhospitable reliefs and cities teeming with people. By strolling in search of a teracrystal raid or a wild Pokémon, it is thus possible to lose for several hours without seeing the time pass. The lack of loading plays a lot on the immersive nature of the game, and on this point, it is a total success. At this price, we regret the latency times a bit consistent on the capture screens and the jerks of certain animations, however not so ambitious. While waiting for a corrective patch worthy of the name, there’s nothing to give up on your console: we didn’t shy away from our pleasure in playing apprentice explorers.

A story not piqued by the Coiffetons

You will need time and a lot of investment to overcome Paldea’s Pokédex and all the challenges offered by the wide world of Purple and Scarlet. At the start of the game, the choice of our treasure hunt contributes to the freedom promoted by the gameplay, but we must quickly face the facts: to complete the game, our hero will have to play on all fronts. Your mount’s skills will have to be unlocked by the sweat of your brow, while the race for arena badges will make it possible to capture increasingly powerful monsters. Finally, the dismantling of Team Star acts as the main plot, with an agreed but effective storyline around a mysterious character.

It’s not so much in the writing of his screenplay as Pokemon Purple and Scarlet revolutionizes its game, but rather in the way players can now live their adventure. By reviewing its dialogue system with NPCs and making the opponents you come across less aggressive (you now have to talk to them to start a fight), Nintendo offers a much smoother game, much less forbidding than its predecessors could be. Everything obviously loses its original charm, but let’s face it, we’re not complaining.

At the school of trainers 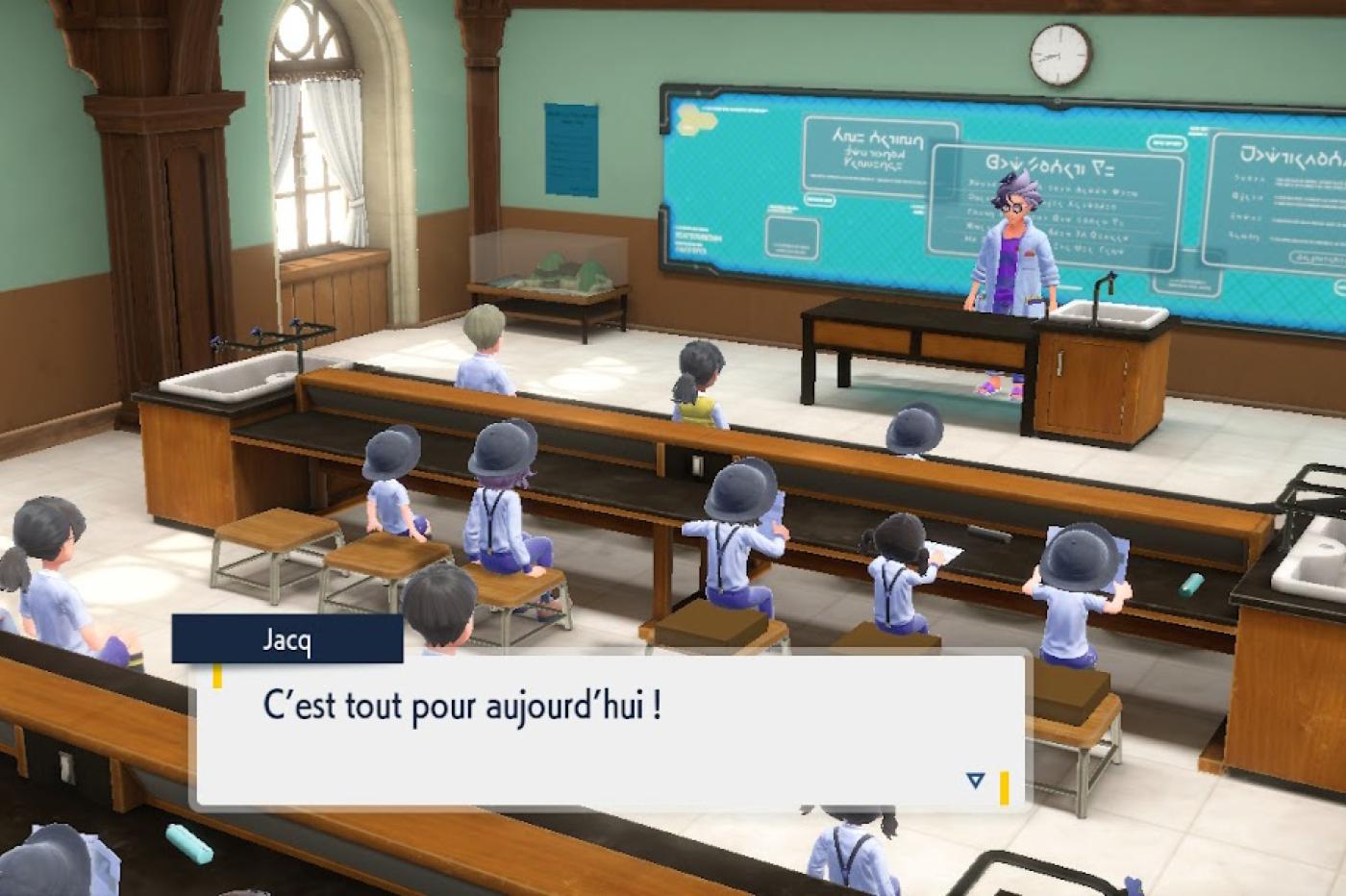 The choice to have anchored Purple and Scarlet in a student register is probably no coincidence. Since Harry Potter, the recipe for the student in search of learning is a safe bet, and Nintendo cleverly manages to play with the codes offered by the Raisin Academy (or Orange depending on the version). Obviously, school is only a pretext: after your integration day, you will have few opportunities to go back there. It will however be possible to play the good students, by participating in the courses given by the Academy. Through a whole series of cinematics — sometimes a bit boring, we agree — continuing your school career will ensure you advanced knowledge in the art of combat and exploration. A nice attention from Nintendo, which plays the detail card where no one expected it.

Without revealing the ins and outs of the plot, we will add that for its ninth generation, Pokémon goes against the usual plot of the episodes of the saga on the question of the Legendaries. An astonishing choice, which brings a breath of fresh air to a saga that we thought we knew by heart.

With its open gameplay, Pokemon Purple and Scarlet realizes the dream of all budding trainers of the 1990s, by offering a ambitious game, finally up to our expectations. Too bad, the saga evolves but redoubles on the question of graphics. By drastically improving its game, the title only points out its visual weaknesses, and let’s face it, they sting. It is all the more frustrating that some efforts are made on the textures, in particular of the clothes. In combat and during the capture phases in particular, the latencies and jerks are too numerous to go unnoticed. During our trip, the clipping also proves to be a bit frustrating. Game Freak made its choice, and graphically transforming its universe was obviously not the priority.

This is especially true for the new generation of Pokémon that populates Paldea: few pocket monsters find favor in our eyes. The starters like the legendaries no longer have their flame of yesteryear. Fortunately, Nintendo strikes very hard to compensate for this defect, with a Titanic Pokédex, not to mention the alternative forms. More than ever, catching them all is the backbone of the game, and will delight completionists.

Especially since if Purple and Scarlet turn out to be a little disappointing graphically, not everything is to be thrown away, far from it: some new monsters already promise to remain in the annals, while others play an interesting role in the main scenario. Perhaps the most successful aspect of the game lies in the new display of the Pokédex, which is a real masterstroke both graphically and purely practical.

Ingame, Nintendo is also making efforts on certain aspects of the game, starting with the size of wild pokemon. The whole point of meeting pocket monsters in the wild was to play on their difference, and it is clear that it is a great success. The massive size of a Gyarados will make it even more menacing, while bug Pokémon will be nearly indistinguishable from tall grass. Even within a single species, the differences in size can bring a little visual diversity, and that’s good.

Behind all these more or less marked developments, Pokemon Purple and Scarlet retain the same combat mechanics, and all the ingredients that have made the success of the cult franchise. Between two wild fights, the gameplay is nevertheless intended to be less repetitive, while the teracrystal orbs bring the agreed but pleasant fantasy to the most demanding clashes. Since the Mega Evolutions of the sixth generation, we inevitably begin to be accustomed to the exercise, but Nintendo manages this time to bring a little stakes, by endowing all the Pokémon with a random teracryst type. What complicates even a little the task to the players in search of the perfect stats. 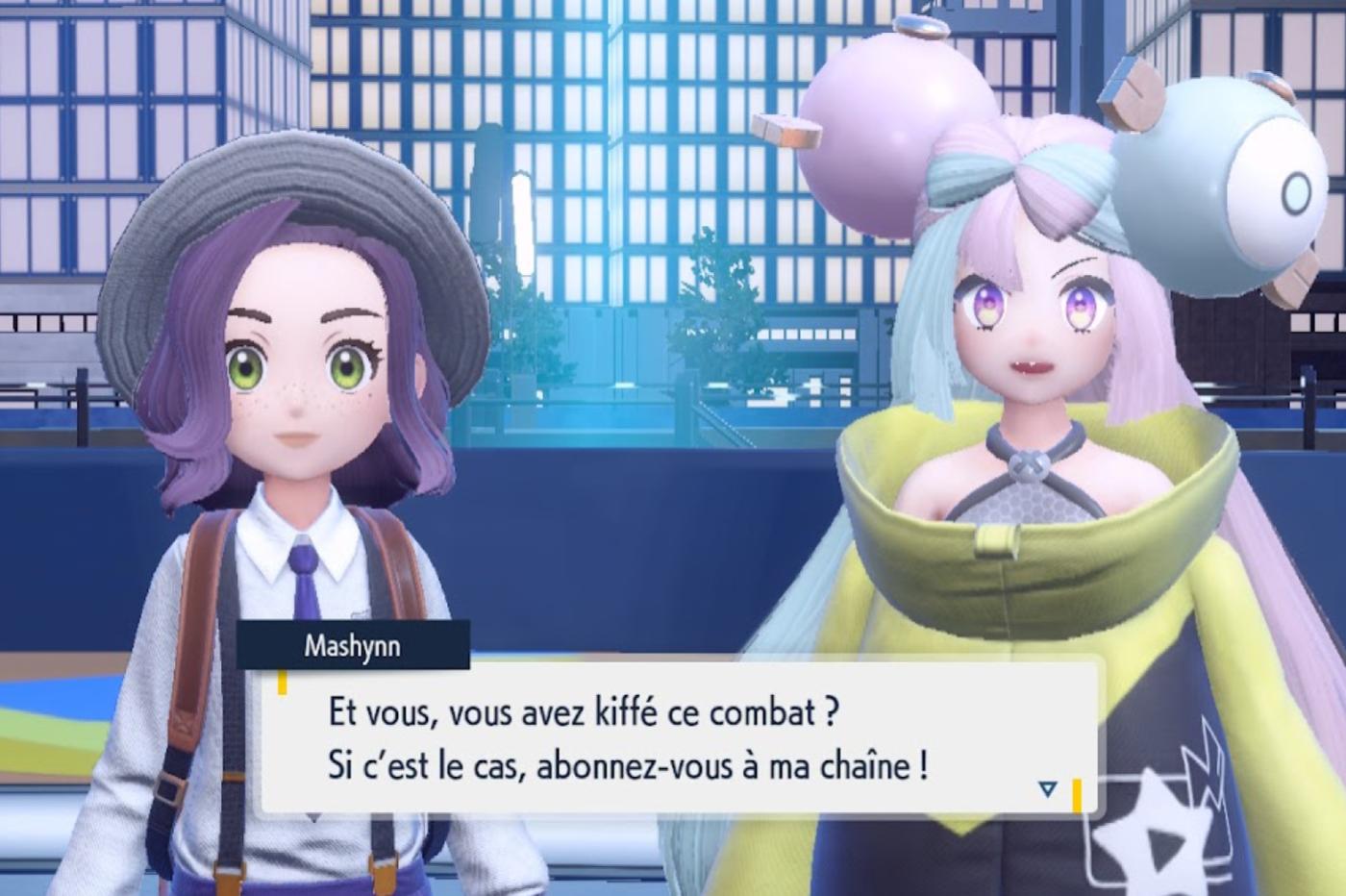 On the online game side, we were only able to test it very briefly during a preview session supervised by Pokémon. The latter, however, seems rather successful, with the possibility of fully living its adventure in cooperation with friends via a Wi-Fi connection.

Available since November 18, Pokemon Purple and Scarlet is offered in dematerialized or physical version, from 44€, only on Nintendo Switch. For the occasion, Game Freak also offers a Duo Pack with both games combined in a steelbookand even a special OLED version of the console, decorated in the image of the license.